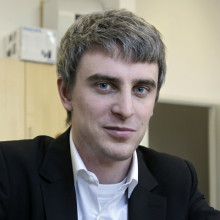 Step Up is, above all, a place full of kindness, and a place where you can witness extraordinary change.

I have been involved with Step Up for almost as long as I have been coming to Russia, and it is difficult to imagine life in Moscow without the Centre.

Originally from London, I have been based in Russia since 2009.
One of my first trips to the country was in 2007 when I was a volunteer at Step Up’s Summer Camp in the Pskov region. Particularly given my level of spoken Russian at that time, it was an overwhelming and eye-opening experience. But it was so compelling that I returned for the next four years in a row.

After moving to Moscow, I was one of the people who helped found Step Up’s football team, with which I remain involved. I also assist with translation.

Step Up is, above all, a place full of kindness, and a place where you can witness extraordinary change. But it’s also somewhere you have friends, somewhere you visit regularly – and somewhere you would miss greatly if it was gone.