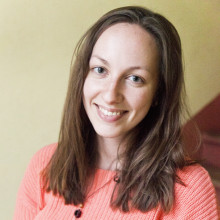 At Step Up I drink tea, eat all the biscuits, and teach Russian language.

I’m an unusual sort of humanist. In school I loved maths and studied biology. I didn’t like essays and, to make them more interesting, I tried to write them in the style of Afisha. In my last years at school I started taking photos on my father’s Zenit camera.

After school I studied photography in a subsidiary of the Gerasimov Institue of Cinematography. When I realised I didn’t want to pursue photography, I fulfilled a childhood dream and worked in Artyom Lebedev’s design studio. I was 18 years old and I really loved what they were doing. In another life I would have become a designer of the world’s best interfaces. After a period proofreading at the studio I left to get my degree and ended up at the linguistic department of Moscow State University.

During my studies I found the time to learn Sanskrit, take Zalizyanka’s special course and fall in love with academic science, become enamoured with comparative historical linguistics, take part in scientific grants, produce a journal and get married. It was when I was preparing for my exams that I realised that I understand things better when I am explaining them to other people (one day I explained our whole course to a fellow student who had missed half the year in the space of 30 minutes – and she got top marks). I also realised that I like categorizing complicated theoretical ideas, explaining them, and making them seem easy to others. That’s how I began to teach.

I combined my last year at university with two jobs – in my free time from Step Up I continued working in a leading monitoring agency as a media analyst.

Photography remains a hobby and if you are interested you can see my efforts here: «http://www.flickr.com/photos/kefafka/ «

At Step Up I drink tea, eat all the biscuits, and teach Russian language.