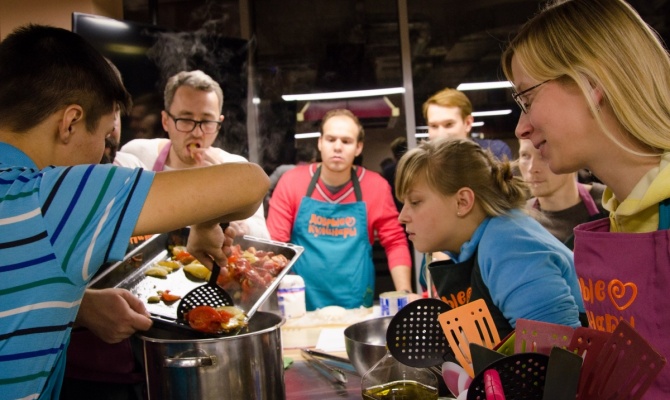 On 26th October we launched a new project called “MaslomVverh”. It is a joint venture between the Step Up Centre and the culinary club Kings and Cabbage, which recently opened its doors to guests and lovers of delicious cooking.

The MaslomVverh project is unique in every respect – it is not a one-day workshop but a year-long programme for students and graduates of orphanages who have real problems and goals. Over the course of the year two groups of Step Up students will learn new skills, regularly taking part in culinary activities at the Kings and Cabbage club. The two groups are: “professionals” – those who have finished college and have received a cooking qualification, and “newbies” – those who want to learn to cook but have no idea where to start.

The aim of this project is not just to teach students how to cook. It is also to show those who have a cooking qualification, and want to link their life to the profession, the attraction and prospects of such a career. We want to give them the opportunity to feel like professionals – as many of them really do know, and can do, a lot.

As a result of the programme, students will become competitive professional chefs and amateurs who are able to cook delicious homemade food for themselves and their families.

Ekaterina Pal and Roman Lerner, the creators and leaders of this wonderful club, will be running classes. Depending on the topic of the session, they will be helped by volunteers and professional chefs who know everything about a certain kind of food. The first cooking session was held on 26th October 2015. We visited the Kings and Cabbage club for the first time – it has an incredibly cosy kitchen made for culinary success. Here, over the course of four hours, we cooked tomato soup and three kinds of Neapolitan pizza.

As in any learning process, this project involves homework. During the first lesson, as well as making the planned dishes, students made a dough which they had to take home and make pizza with. They had to put a photo in the VKontakte group: the next day we received photos of their first domestic work.

What is so important about the project is that students learn to work as a team, listening to one another and following instructions given to them by senior chefs. A lack of such skills often prevents students from being successful in their job.

Many thanks to Ekaterina and Roman for their hospitality, a warm atmosphere and very interesting activities. Thanks to our sponsor, Globus – particularly Svetlana Anatolieva – for supporting the project. Without this support, none of this would be possible.

Thank you to our volunteers – without you, classes would probably turn into chaos! 🙂 And of course, thanks to the person who is always behind the lenss: the beautiful Paulina Bikonya.

You can find photos from the day in the Maslom Vverh album in our gallery.