Literature Club and Cinema Club on 27th February: an announcement 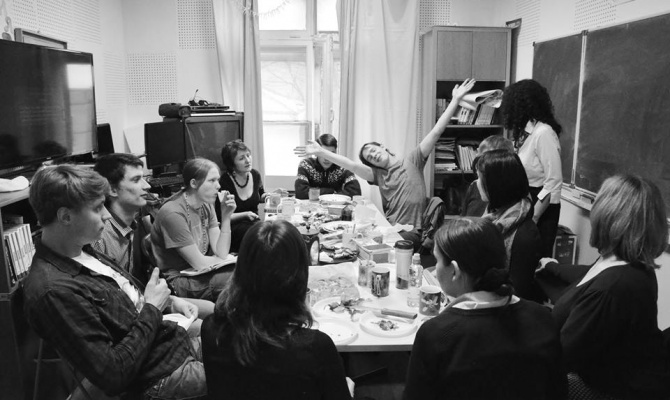 On 27th February we would love for you to come and take part in our clubs! It will be the first time that we hold both Literature Club and Cinema Club in one day. It is a great way for us all to get together, invite our friends and spend time together, speaking about literature or watching and discussing a film.

The film has an unusual name, “Landfill Harmony” and tells the story of an ordinary music teacher who managed to change the lives of children living in great squalor in South America. Watch the trailer.
here.

At 17.00 we would love for Cinema Club guests to move onto our Literature Club.

This club is one of the Centre’s old companions and for over 15 years Mikhail Igorevich Sverdlov has led it, an incredibly interesting man: a literary critic, co-author of several novels and a talented teacher!

For many years the club’s discussion of worldwide literature has united generations of graduates and teachers, as well as students of different ages from our Centre. The club’s work would not be possible without our graduates, tea-drinking and the feeling of being involved in something of such a high level.

This time, when the club gets together, we will be celebrating the birthday of our long-standing leader, Mikhail Igorevich. All of our colleagues, students and friends are invited, even if it’s the first time you have come along to the club – it’ll also be a sort of anniversary for you!

We will be discussing Hans Christian Anderson’s “The Ugly Duckling”.

In order to participate in the club we ask you to register your interest, so that we can get an idea of numbers, by filling in the form below.

REGISTRATION TO PARTICIPATE IN LITERATURE CLUB AND CINEMA CLUB