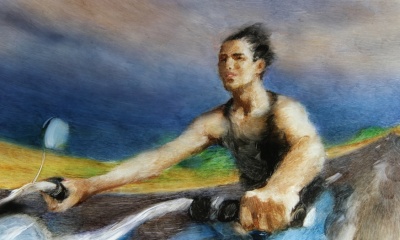 On 21st May at 15.00, as part of the Step Up Centre’s Cinema Club project, we will be showing the film “Spirit in Motion” and speaking to its creators. Everyone is invited!

What is the film about?
Eight of the strongest athletes from around the world are fighting for the chance to get to Sochi and win a gold medal, but first each of them must defeat their strongest opponent – their disability. It is the official film for the XI Winter Paralympic Games in Sochi and the largest-scale film of this kind. It was created at the request of the International Paralympic Committee in Bonn, Germany.

Directors of the film “Spirit in Motion” made their debut with this film. They are graduates of a Russian State Cinematography Institute (VGIK) workshop led by Sergei Miroshnichenko. Their names are Sofia Geveiler, Julia Bivsheva and Sofia Kucher.

This film was the first full-length project of the “VGIK-Debut” Production Centre, created in conjunction with the Ostrov Studio. The producer of the film was director Sergei Miroshnichenko who said, “This film is especially important to me because my father went blind nine days before the end of the Great Patriotic War and I was his guide from a very young age. I understand the willpower of those with a disability: my father became a historian and a professor and he was repeatedly awarded by the state for his contributions to education”.

Filming of the documentary “Spirit in Motion” was conducted during the XI Winter Paralympic Games in Sochi in 2014 and before it, too, throughout the year on different continents across the globe: the main storyline is a chain of portraits of the brightest Paralympians from different parts of the world. Documentary stories of athletes are combined with animations, illustrating the stories of Paralympic athletes.

Among the heroes of the film are: blind German biathlete Vivian Hösch, Australian skier Jason Sauer who survived the amputation of both legs on Christmas Eve following a drug overdose, US hockey player Rico Roman who lost his left leg after a mine explosion during military service in Iraq, Alexey Salamon who was born with twisted limbs due to radiation exposure following the Chernobyl disaster, Chinese skier Haitao Doo who underwent an operation to amputate both arms at the age of 5, and for the first time in history Brazil was represented at the Winter Paralympic Games by snowboarder Andre Sintra.

Two athletes, Oksana Slesarenko and Andrei Smirnov are curlers from Russia and are a couple. They became disabled and lay in hospital for a month in the same year – but they only met each other years later, on the ice, curling.

In total, over 120 people worked on the creation of the film “Spirit in Motion”. During filming, the International Paralympic Committee labelled the film the first ever official Paralympic film!