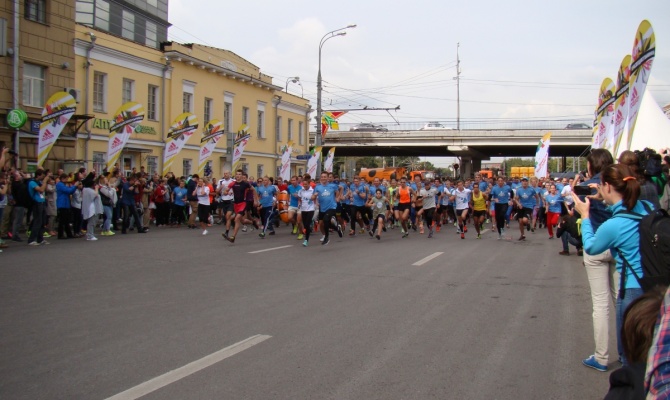 This Sunday 13th September, we will take part in a run organised by Nike – We RUN Moscow 2015. This will be the third year that our students and volunteers have taken part in this run – the autumn run has now become a traditional event for us.

Around 20 volunteers took part in the charity run at the Kind Moscow festival on 6th September, running in aid of the Step Up Centre. Some of these volunteers decided to continue their journey all the way to the Moscow marathon, including this 10km Nike run. We asked them to tell us a bit about themselves and about what inspired them to take part in the race as part of our team.

Come and support our runners! The run begins at 16.00 at VDNH; runners will arrive at 15.30 at the entrance to VDNH.

Get to know our sports team! I am a student at the Step Up Orphan Opportunity Centre. I love cycling. Last year I ran 10km for the first time and I really enjoyed it so I continued running in my spare time, – Irina Abramova Sport is my life and this is confirmed in my love of football and the fact that I play for the Centre’s football team. As a child, my favourite subject was P.E. I must admit that I’ve only ever ran short distances, never long distances – and if I manage to prepare, I will run alongside the others. This will be an incentive and a new challenge for me, so I will prepare properly – and add another accomplishment to my list. Of course, it’s worth it for the drive and adrenaline rush, – Mikhail Sokolovsky I was a volunteer at the Centre’s summer camp. For the last two years I have been running fairly regularly. I recently ran the musical half-marathon. I really like large-scale runs. They always lift my mood, especially if it’s in aid of a good cause, – Tamara Pashinova I’m a graduate of the Step Up Centre and for a few years I’ve been volunteering at the Belsky-Ustye summer camps, helping to work with students. I really love sport, so I decided to train as an athletics coach. I received my diploma this year so I can start working now. Three years ago I ran the Moscow marathon for the first time and realised that it was really cool and that nothing is impossible! – Maxim Mironov My whole life, I have been sure that sport and I are polar opposites, completely incompatible. In every sporting activity and event, I was on the sidelines – and happy about it. And somehow, a couple of years ago I decided to take control of my weak self and signed up to the gym. And off I went… Gym, pilates, personal training, dancing, yoga – I tried and learnt everything. And this year I’ve come across running! I never thought I’d enjoy it but I’m already preparing to run my first official 10km. Running – what could be more simple?! – Ina Kulagina I work at the Step Up Orphan Opportunity Centre as the coordinator of summer camps at an institution in the Pskov region. At school I played various kinds of sport – cross-country running, badminton, water polo and swimming. But then, for the next 10 years I didn’t pay much attention to sport. Nevertheless, I did take part in the 10km run last year with other Step Up students. From then, I started running more and more often, – Howard Amos I’ve been playing sport since I was at school- tennis and basketball. While I was studying at the institute I swam regularly. In the summer I prefer cycling and hiking while in the winter I prefer cross-country skiing. I started running in 2013. I was inspired to take part in the marathon when I saw the work at the Belsky Ustye summer camp. Students from the orphanage and volunteers had such energy and a thirst for life – it gave me the strength to make it to the end! – Adi Shtikov I was a volunteer at this summer’s camp in Belsky Ustye. Unfortunately, we had to wake up at 6am there so I never succeeded in a pre-breakfast run 🙂 In general, I don’t run very regularly but to see some of the other volunteers and go for a 5km run around Moscow is always fun. As well as running I row every weekend and I also love swimming, – Alexander Levinsky I have never taken part in a big run before; running for me is a way of clearing my mind and regaining consciousness – usually in the evenings at Serebryanni Bor amongst the fir trees, breathing in the fresh air. So taking part in a run like this is out of my comfort zone. This is exactly what the Step Up Centre is striving for – to go outside a certain framework and not be afraid. As well as running, I practice yoga and boxing in my spare time to relax and find inner harmony, – Ekaterina Fomina

I work at the Step Up Orphan Opportunity Centre. I started running practically as soon as I could walk! I run far and diligently. I think my attraction to running lies in the fact that you are alone with your thoughts – and it’s good for you. You can listen to music and it’s generally a lovely way to start the day! You can do it on a work day or on the weekends, – Sergei Chernenko