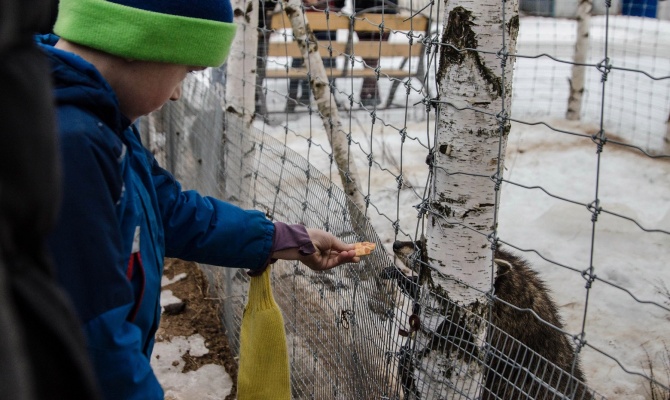 Annual spring and summer excursions are fundamental traditions for our Centre. Students and teachers impatiently await their announcement, which then triggers wild discussions about the forthcoming trip.

These are real adventures and although we don’t go too far from Moscow, every time we find ourselves in wonderful places connected with the lives of famous writers, musicians, cultural figures, or with historical events. We went to one of these places early one Saturday morning, March 4th – to Borodino.

The first important place that visited, recounting the events at Borodino, was the Borodino Museum and Reserve.

The Borodino Museum and Reserve was founded by the decree of the Emperor on 26th August 1839 at the site of the Battle of Borodino and is the oldest museum in the world to be created on a battlefield. In 1912, on the 100th anniversary of the Battle of Borodino, 33 monuments to regiments, divisions, corps, artillery companies and batteries were built on the field. The command posts of Kutuzov and Napoleon were marked by special monuments. A headstone on the grave of General D.P Neverovsky was erected with the image of the cross of the Order of St. George the Victorious- the highest military award of that time. And even earlier, in 1839, on the 25th anniversary of the entry of Russian troops into Paris, a 27-metre monument proudly towered above the Borodino field on the Kurgan Heights (Raevsky battery), dedicated to the heroes of Borodino “who gave everything on the field in honour of Faith, the Tsar and the Fatherland.” At the foot of the monument the remains of the legendary commander P. I. Bagration, who was mortally wounded in the Battle of Borodino, were reburied.

Wonderful guides immersed us in the events of such a time; they let us feel the spirit, the boldness and the courage of the soldiers and generals. We visited the very heart of such fateful battles, and each of us was filled with an incredible sense of pride. After visiting the museum, we went to an amazing place, the Spaso-Borodino Women’s Monastery, which is connected to the widow of Major-General A.A. Tuchkov who was killed in battle – Margarita Mikhailovna Tuchkova.

The early history of the monastery is associated with her feat: the faithful wife who went to the battlefield to find the remains of her deceased husband, General Tuchkov, and to offer prayers and burial according to the scriptures.

After a short excursion the nuns fed us a tasty lunch and we continued on our way. Later, a real surprise awaited us: the eco-farm “Saviour Alexandrovsky”- a wonderful place with goats, rabbits and even raccoons! We were each given a bag of carrots and we fed the goats. Then, we were treated to delicious natural products made at the farm from goats’ milk. The students got so carried away that after trying honey, one of them even said “Honey is also from a goat!” A big thank you to everyone that made this excursion possible!

There are more photos of the excursion in our gallery. Thank you to Polina Bikonya for the photos!

We will share a short video about how we travel as a Centre.