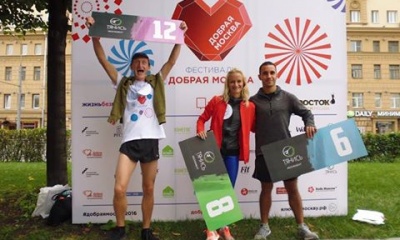 For the second year in a row, students and volunteers from the Step Up Centre took part in a large-scale city event – the Good Moscow Festival.

As part of the event, a fair is set up with charity foundations and NGOs selling products. A charity race also takes part every year. Anyone can take part in it as long as they make a donation to one of the selected charities.

This year we were represented both at the fair and in the race. The Hands from There workshop sold their traditional wooden gifts: assembly kits for birdhouses and feeding troughs. The workshop coordinators also held a children’s masterclass on how to assemble and paint birdhouses. The children even got to take their masterpieces home!

Colleagues, volunteers and graduates of the Centre took part in the race and one of the winners – the bronze medallist, to be precise – was our graduate, Maxim, who is known for his love of sports and his willpower – he takes part in the Moscow marathon every year!